The Post-Historical World of EarthQuest 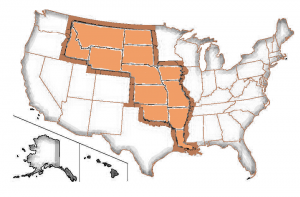 EarthQuest is set in the near-future where centuries of inadequate environmental, political, and economic decision making have culminated in national and global ecological crises and world-wide civil disruptions.  Governance, authority and economics have decentralized, diversified, localized and simplified. Early 21st century government and corporate leaders call this “collapse.” Other terms might be down-sizing, right-sizing, or localizing.

“Post-history” is the fictionalized (but plausible) history created for the near-future world of EarthQuest, after the fictional collapse of early 21st century societies and human civilization. Post-history in EarthQuest is created as a realistic hypothesis of what likely could or may happen, following current trends, but is certainly not an accurate prediction of what will happen.  Using post-history will allow youth to explore creative possibilities and implications of today’s political, environmental, social and economic decisions.

Seven primary transformations dominate the reality of human communities in the world of EarthQuest:

o   The collapse of 21st century societies and most centralized governments, the division of the U.S. into two geopolitical regions, and the immediate rise of local interconnected ecoregional democracies.

o   The adaptation, resilience and survival of human communities in the face of a rapidly changing planet undergoing climate disruption.

o   The disruption of the centralized global corporate-consumption-growth economy, and the rise of a parallel community economic system of more sustainable and resilient local networks of small livelihood businesses and cooperatives supplying goods for simple living, natural food production, public health and wellness, and renewable energy.

o   The importance of applied science and biotechnologies to help human communities survive and transition to vibrant sustainable and resilient economies.

o   The importance of cultures and education to help human communities transition to meaningful and sustainable lives through intentional social change initiatives.

o   The rise of youth—the empowerment of next generation leaders–with the support of wise elders to fill the void of leadership needed for the transition.

o   The rise of the Vanguardians.

By the mid to late 21st century, the earth’s capacity to sustain a growing human population under heavy consumption rates and natural resources extraction rates had been severely diminished.  The planet’s once plentiful natural resources─water, soil, farmlands, forests, fisheries, minerals, and fossil fuels─were no longer adequate to meet the needs of humans and other species.  Centuries of mismanagement, over extraction and environmental degradation caused severe disruption of biological diversity and loss of ecosystem services. Pollution, synthetic chemical toxins, hazardous wastes, and radioactive nuclear wastes pushed ecosystems and species to the threshold of resilience capacity and to the brink of survival.  Climate disruption finally stretched many watersheds beyond their ability to adapt and still provide the stability to support human life. Abnormal patterns of frequent and devastating natural disasters─hurricanes, wildfires, blizzards, tornadoes, floods, droughts, crop losses, species extinctions, and insect plagues─overwhelmed every level of government to cope.  Many years of national and international political inaction, fear mongering by political demagogues and a series of strategic public disinformation campaigns that polarized the nation and pit neighbor against neighbor, and citizen indifference ensured the next generation would inherit almost insurmountable crises.

The beginnings of terrestrial and ocean ecosystem collapses reached a dismal climax by about the mid-21st century. Global economic recessions─particularly heavy in certain non-resilient regions─increased job losses, poverty and civil unrest among the masses. Mass migrations of humans and other species to the remaining somewhat stable ecosystems became the new norm. However, competition over the more resilient watershed ecosystems brought conflict and governmental, economic and social crises in many places.

The long anticipated decline in fossil fuel production as a result of Peak Oil meant the supply of cheap fuels could not meet the increased demand and stay affordable under the stagnated wages of most citizens.  Fossil fuel prices skyrocketed, and everything dependent on low oil and natural gas prices—including energy, fertilizers, and plastics—followed suit.  The resulting energy crunch meant disruptions in food supplies, frequent power outages, unavailable global products and services, and the closing of most formal small businesses.  When natural disasters and industrial accidents disrupted oil and natural gas supplies, working class and poor communities went without fuel, electricity and food.  Middle income households reallocated most of their wages to high-priced fuel and food until nearly everyone dropped out of the middle class.

The second source of the energy crunch was the bursting of the Carbon Bubble. The wealth of major fossil fuel companies depended on extracting every ounce of “recoverable” fossil fuel in the ground.  International agreements finally set drastic global greenhouse gas emissions caps and cuts to try to limit climate disruption. This required most oil and gas to stay in the ground to prevent it from being burned and emitting greenhouse gases.  Investment in oil and gas drilling and development was halted in most places, and the cost of fuels─already hitting highs from peak oil effects─simply skyrocketed after national, regional and local hoarding policies were implemented. The bursting of the Carbon Bubble eliminated oil and gas wealth, investments and retirement funds overnight, causing global financial system collapse of the corporate-consumption-growth economy.

Several small and isolated bubonic plague epidemics erupted around the globe, and international environmental and health professionals were overwhelmed.  Cheap-to-make medicines were sold to the highest bidders, and while global pharmaceutical giants amassed record profits, the world’s working class and poor had no access to market-priced medicines.  Malnourished populations had lowered immune systems, and sporadic global shipping of even minimally effective drugs made a bad situation even worse.  Cumulatively, epidemics began noticeably reducing local human populations.  When “The Big One” hit, caused by a particularly contagious and drug resistant mutated Yersinia pestis bacteria, there was little human resistance. Several annual waves of global pandemics erupted and three billion humans did not survive.

The three interconnected calamities—climate disruption with ecological decline, the fossil fuel energy crunch from Peak Oil and the Carbon Bubble, and the eruption of pandemics—became known as the “Unholy Trinity.”  While some people, families and communities did prove to be resilient, most centralized governments, centralized economies and other centralized institutions of the early 21st century did not.

Young visionary leaders had long seen the growing global problems faced by local and national governments, and recognized the incapacity for the system of centralized institutions to innovate a way out of trouble.  Youth were highly educated and unemployed, and hungered for a viable and meaningful future.  They had been using the internet to mobilize other young people from around the world into informal think tanks, learning and communication networks, ecosocial research centers, and experimental intentional communities for sustainable living. They formed small economic cooperatives and began experimental organic farms.  They created democratic homeowner guilds to unite homeowners committed to transitioning to sustainability and restoring their local watersheds. They sang songs, painted pictures, and wrote poems. They offered prayers, performed plays and told stories.  They built solar cottages, invented bioscanners, grew medicinal herbs, taught sustainability education to children, and celebrated seasonal and life events with ceremonies and rituals. They studied ecological science, economics, government and the humanities. They researched ancient traditions, reached across cultures to share insights, and they sought out their retired elders for wisdom and guidance.  En mass, youth and elders began The Transition.

Shortly after the Collapse, the federal government in the U.S. declared a temporary national state of emergency and martial law was declared in every state.  Local ecogovernance emerged out of the chaos as the most promising way to organize resilient and sustainable human communities adapting to crisis. A network sprouted of interdependent but autonomous local ecoregional governments, based on ecologically restored and protected watersheds, and low-energy, low-consumption living.  Local livelihood economies focused on providing for basic human needs, and using practical technology primarily to increase community adaptability, resilience, and survival.  Trade took place between neighboring ecoregions, and for some goods, with other parts of the globe via seafaring sailboats.  Ecoregional governments, small businesses and citizens worked together, sharing best practices for adaptation and long term sustainability.

On their own, ecoregional governments were weak and insecure, and some called for a new national democratic league to be established to address problems and issues that could not be addressed by local ecoregions.  The idea of a networked league of ecoregions offered a sane and promising vision for resilience, survival, sustainability, stability and security. It offered a story of hope for a culturally diverse humanity, and attracted the loyalty and support of many citizens.  This model was championed primarily by the new generation of youth leaders.

Visionary youth leaders engineered a national citizen election event, along with local ecoregional election events, over a three day period.  It was called the Great Elections.  Voters in eastern coast states and western coast states overwhelmingly voted for the creation of local ecoregional democracies, networked under the name, the “Unum League.”  New laws were adopted locally to transition communities toward stability, security, peace, justice, freedom, resilience, sustainability, prosperity and a high quality of life.  However, citizens from the Heartland states voted overwhelmingly to restore and maintain previous political and state governmental structures, and to relocate the remnant U.S. federal government to Kansas City.  They called themselves the United States of Middle America (USMA).  They, too, passed sweeping new laws.  They banned the use of ecoregional governments, established weak state governments, deregulated commerce, privatized public property, and turned sustainability and resilience efforts over to corporations and private market forces.  Both the market governance of the USMA and ecoregional democracies of the Unum League continue to work on stabilizing human survival rates, restoring local ecosystems, promoting critical sustainable economic activity, and bringing peace, justice and order back to human civilization. The two approaches are as different as night and day.  And so it begins….

Why The World Needs A 'circular Bioeconomy' - For Jobs, Biodiversity And Prosperity via @forbes https://www.forbes.com/sites/worldeconomicforum/2020/10/06/why-the-world-needs-a-circular-bioeconomyfor-jobs-biodiversity-and-prosperity/ @anamcircle

And a child shall lead them, saying the emperor has no clothes.

Most American teens are frightened by climate change and about 1 in 4 are taking action, Post-Kaiser poll finds https://www.washingtonpost.com/science/most-american-teens-are-frightened-by-climate-change-poll-finds-and-about-1-in-4-are-taking-action/2019/09/15/1936da1c-d639-11e9-9610-fb56c5522e1c_story.html

Opinion: Why baby boomers’ grandchildren will hate them https://wapo.st/30p5h7z

Climate change can be Gloom and Bloom. This is a $15 trillion opportunity for farmers to fight climate change https://cnb.cx/2XbAOfq

If we only had a climate game that kids could play in after-school clubs... #EarthQuestGame.

Most Teachers Don't Teach Climate Change; 4 In 5 Parents Wish They Did https://n.pr/2VQw6A2